When we began to ferment things at Legume, we didn’t realize we were “doing fermentation;” we were just following a recipe. We had no inkling of the amazing biological processes that were happening in the beautiful stone crock of salted cabbage we kept out on full display in the dining room, which, about half of the time, turned into a crock of rotten funk. (I still remember the looks of “oh no, here we go again” I used to get from the servers whenever I brought the crock filled with the latest batch out to the dining room.) We had no idea that things such as temperature, time, and properly weighting the cabbage below the brine level made that much of a difference, which probably had a lot to do with our low rate of success early on. We were just following a recipe.

The second year we were open we began purchasing the majority of our vegetables from Who Cooks For You Farm. One fall day, Chris Brittenburg, who runs Who Cooks with his wife Aeros Lillstrom, came in the back door of Legume with a bushel of baby bok choy and a photocopy of a kimchi recipe. “Make this” he said. We did, and it turned out great, in part because we had learned by this point that these kinds of things did better in the basement. And though by this point we had an inkling that something mysterious was happening in the buckets of salted vegetables that sometimes tasted amazing after a number of weeks, we didn’t really think of ourselves as categorically “doing fermentation” or that we were “fermenters.” Still, we were just following recipes.

Eventually, I stumbled upon Sandor Katz’s book, Wild Fermentation, and a million things kind of crystallized at once. Up until this point, I’d viewed vegetable preservation mostly through the lens of canning things, because that’s what I’d observed my mother and grandmother doing growing up. From the very first summer we were open, my vision was to can a lot of food in the summer and fall in order to minimize our dependence on non-local conventional food streams in the winter. But canning is an extremely labor-intensive method that uses a lot of gas, water, and canning lids which can’t be reused. Moreover, most of the things we canned required a lot of vinegar and sugar in order to be safely preserved, which limited their uses in our cooking.

With fermentation, it became possible to preserve a lot more food in a fraction of the time, which radically changed the way we cook at Legume, especially in the winter and early spring. We soon learned that the benefits of using fermented foods in our cooking extended beyond preservation. From a culinary perspective, cooking with lactic acid opened up a whole new world by providing a new way of adding acidity to things alongside citrus, vinegar, and wine. Holistically-speaking, we discovered many of the fermented foods we made married very well in soups made with the rich stocks we always have on hand from all the meat bones we produce through butchering. Finally, there are all of the benefits of eating naturally probiotic foods, which, though not a huge draw for the restaurant, something which is tremendously satisfying to be feeding to people.

Though we got into fermentation because we were trying to preserve produce into the winter, it’s also led us down other paths. Four or five years ago, we went through a tempeh-making phase, but gave it up because it was really labor intensive and we just couldn’t keep up with it. We revisited tempeh about a year and a half-ago and learned how to streamline the process.  We now have a vegetarian tempeh burger on the Butterjoint menu, which is offered every day. On the Legume menu, tempeh appears in a more layered dish. Its current iteration includes a sauce made with canned tomatoes and frozen red pepper puree’ with vegetables from Who Cooks For You Farm, ginger, garlic, shallots, soy sauce, fermented hot pepper sauce, and molasses, which is very reminiscent of General Tso’s sauce.

Justin Lubecki, a local fermentation enthusiast and founder of Ferment Pittsburgh, recently took a sample of our tempeh over to the University of Pittsburgh Center for Biological Imaging. Here is what our tempeh looks like under an electron microscope: 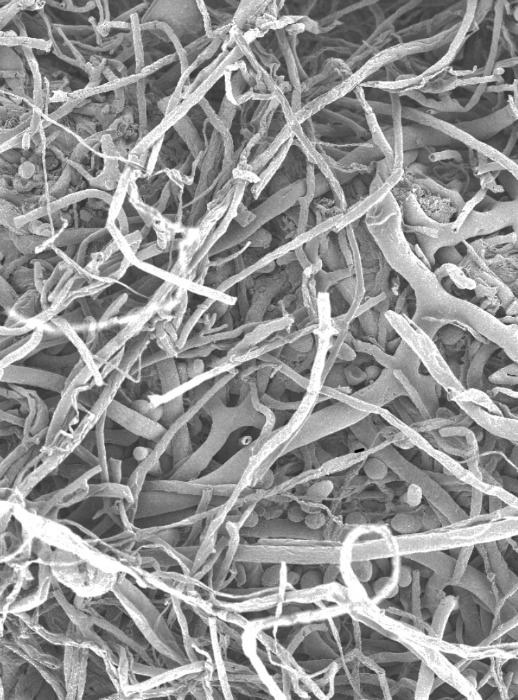 It’s pretty great having a guy like Justin in Pittsburgh’s food scene to make these kinds of connections. This year, Ferment Pittsburgh will be holding its third annual Fermentation Fest on February 18th, from 11am to 5pm at Spirit in Lawrenceville. There will be fermentation workshops, various food vendors, more pictures of fermented foods from the University of Pittsburgh Center for Biological Imaging, and entertainment. It’s a fantastic event with things of interest for all ages.

In support of this awesome event, we will be hosting a happy hour from 4:30-7:30 tomorrow night (Saturday, January, 20) at Butterjoint to raise funds for this year’s Fermenation Festival. All proceeds from the sales of Wigle pickle backs and Threadbare Cider will go directly to support the Fermentation Festival, thanks to their kind donations of booze. Food-wise, all sales from fried pickles and tempeh burgers will be donated as well. We are delighted to support the work of Ferment Pittsburgh. Please stop on by.

Thanks for reading and supporting local foodways.
Sincerely, Trevett